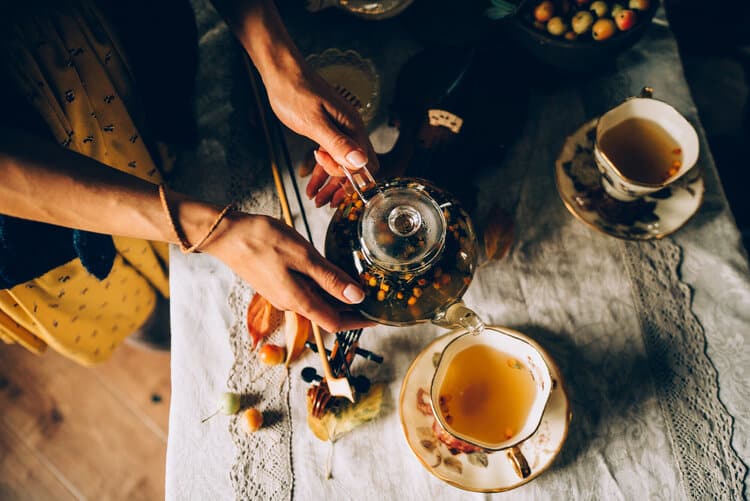 I grew up in a Catholic household in Northern Ireland. However, instead of the regular Ten Commandments, we had fifteen. Now the first Ten were the ones that no doubt you are familiar with however, the five additional commandments had to do with tea and were ingrained within us from an early age. Tea was just not another drink, it was sacred. “Tea can solve all the problems of the world,” my mother often said. More on that later.

No doubt, you are curious about those five additional commandments.

In any setting, choosing the right tea can lead to a hot debate. Should it be Darjeeling, Earl Grey, Green, or White? However, in Northern Ireland, it also took on political significance. Would be it Barry’s, Typhoo, or Tetley’s? Your choice indicated if you were a Protestant (Typhoo/Tetley) or Catholic (Barry’s). The irony of course is that all the tea in the world probably came from the same place but then again, the irony is often lost in political debate.

Yes, all tea should come from a teapot. Teabags were anathema in our house. Tea leaves were the only option. That way, the tea could infuse properly in the pot. However, it was critical that the teapot was warmed or scalded with hot water before making the tea. That way, it retained the heat and made a better cup of tea.

Now, this can be controversial because some people don’t like to see bits of leaves in their tea or the idea of swallowing them. For my mother, this was pure balderdash. She loved to say “If your stomach can handle Guinness or whiskey, a few tea leaves will not harm it.

Tea was not instant. It took time and patience. It had to draw, and we knew better than to pour before the optimal time.

While tea was a perfect drink at any time of day, it always tasted better when shared with someone else.

It was that 5th commandment that has always stayed with me. It was essential to her belief that it could solve all the problems of the world. I cannot tell you how many times growing up when I would hear a knock at the front door and my mother would answer, take one look at the person and knew instantly that something had happened to them or they were burdened. I would then hear her say “Come on in, I will put on the kettle and make a nice cup of tea.” Off they would go to the kitchen and within a few minutes a conversation was underway. One thing I constantly noticed however was the extent to which my mother simply listened and allowed the other person to pour out their heart. She had created a sacred space, a safe space in which her warm and loving presence was felt. She also listened intently. When the person left, I would often hear something like,

“Thanks Trea, I feel 20 pounds lighter.”

I believe that one of the greatest hunger in the world is being truly listened to. As leaders and managers, we often rate our days as successful by how much work we get done. However, there must be a balance and one of the most overlooked emotional intelligence skills that is critically needed is the ability to truly listen. While it sounds so simple, in reality, it is a very hard skill to master. The fast-moving pace of work and the constant distractions make it even harder.

The first step in becoming a better listener is to recognize any barriers that get in the way. We all have habits that get in the way of listening. For some of us, it is rehearsing our answers and thinking about what we are going to say next. While we try to give the impression that we are listening, in reality, we are not, and the other person can feel our divided attention.

For this week’s EQ workout, I put together a worksheet that lists 12 potential barriers that can get in our way when it comes to listening.

Take some time this week and answer the reflection questions and get to know which barriers you use most often. Growing your self-awareness will reap benefits and greatly improve the connections you form with people as you become more present with them.

You may also like this YouTube video I recently recorded which explores how to improve listening in the workplace. Don’t forget to subscribe to get the latest weekly episode.